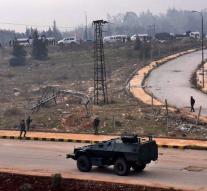 aleppo - The Syrian government has suspended the evacuations in eastern Aleppo Friday. According to state television channel Ikhbariya jihadists tried to smuggle prisoners.

Turkey previously reported that were underway Friday 8000 evacuees on buses from eastern Aleppo.

At the place where the buses sounded Friday explosions, reported eyewitnesses.