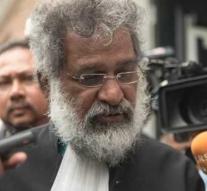 paramaribo - In the criminal proceedings about the December murders, lawyer Irwin Kanhai asked for an acquittal for three suspects on Monday. According to him there is insufficient evidence that in December 1982 Stephanus Dendoe, Ernst Gefferie and Iwan Dijksteel were closely involved in the murder of fifteen prominent Surinamese. The Public Prosecutor demanded 20 years in prison against the three at the end of last year.

Kanhai asked the court to declare the PPS inadmissible because the Surinamese parliament passed an Amnesty Act in 2012. This law aimed to stop the criminal trial so that all suspects would go free. The court martial has declared this law invalid.

The counsel also argued that suspect Dendoe was not present at all during the night of 8 December 1982 when the murders were committed in Fort Zeelandia. As far as Ernst Gefferie and Iwan Dijksteel are concerned, Kanhai said that they had collected later victims at home, but were not involved in the shooting of these people.

In the case of main suspect Desi Bouterse, the current president of Suriname, Kanhai held the same plea on January 29th. Kanhai also demanded acquittal for him.