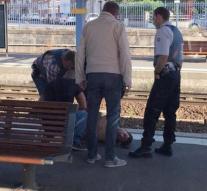 paris - Almost two years after the terrorist attack on a Thalys train, the judicial investigation began to engage in the involvement of Bilal Chatra in Germany. He is suspected of helping the 25-year-old Muslim extremist who wanted to massacre in August 2015 in the high-speed train from Brussels to Paris. Passengers overwhelmed the perpetrator. Two people were injured.

Justice in France confirmed Tuesday that Chatra was charged with membership of a terrorist organization. The German police arrested Algeria in Aachen in April 2016. According to the magazine Der Spiegel, research has shown that Chatra had ties with Islamic State. He would also have been in contact with Salah Abdeslam and the killed Abdelhamid Abaaoud, the brains behind the attacks in Brussels and Paris.