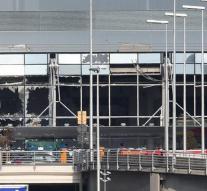 barcelona - Two terrorist suspects arrested on Tuesday in Spain admitted that they were at the airport of the Belgian capital during the attacks in Brussels. That was reported by Belgian media on Thursday, based on the Spanish Justice.

They deny being involved in the attack, reports a national parquet spokesman. The two were arrested in Barcelona with another seven Tuesday. Four of them are associated with the attacks in Brussels in March 2016.

According to the Spanish police, the terrorist suspects are men from 31 to 39 years of Moroccan origin. The four had contacts with the perpetrators of the attacks in Brussels. Some men have a criminal record or are associated with drug trafficking.