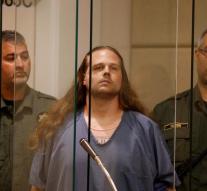 portland - The 35-year-old man, dead dead at the end of May in a strike in the American Portland two passengers, is being spun on Wednesday in court. He is accused of murder. He is also charged with attempted murder, the use of a weapon, intimidation and threatening threats.

Jeremy Christian, who has been convicted of armed robbery before, killed the passengers because they tried to prevent him from bothering two Muslims. He called anti-Muslims. Another passenger who wanted to get caught was injured.

The case led to much fuss. On the Facebook page of Christian would be racist and extremist texts.