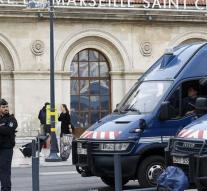 marseille - The man who had killed two women on Sunday in Marseilles on Sunday was released a day before. He was picked up in Lyon on Friday for a shoplift, but returned to free feet on Saturday.

The Public Prosecutor's Office announced Monday that the man shot by a French military used seven different identities. Thus he named Ahmed H, born in 1987 in Tunisia. When he was arrested in Lyon on Friday, he had a Tunisian passport.

None of the seven different identities appeared on the lists of French services that fight terror. The suspect had told the police that he lived in Lyon, was homeless and divorced and that he had drug problems.

The perpetrator would have called Allahu Akbar as he attacked bypassers at the train station. The victims were two nieces who were on their way to a wedding.

Islamic State (IS) has claimed responsibility for the attack in Marseille.