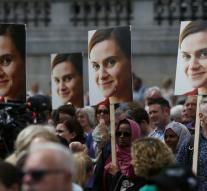 london - The 53-year-old Briton on trial for the brutal murder of Labour politician Jo Cox, was officially found guilty. The jury verdict which killed Wednesday after a trial of seven days, which accused Thomas Mair refused to say anything.

Jo Cox was killed in June by gunshots and stabbings. She campaigned for the preservation of the British EU membership and was attacked as she got out of her car in the village of Birstall, near Leeds. The perpetrator shouted slogans like ' This is Britain '' and ' Britain First '.