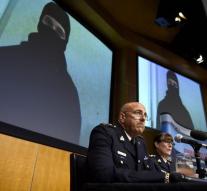 vancouver - The terror suspect Wednesday in Canada killed after a confrontation with the police was planning within 72 hours to commit a bombing in a big city. This enables the police Thursday on the basis of a video had recorded the suspect. The video was shown at a press conference by the police.

The FBI tipped off the Canadian authorities on the video of the 24-year-old Aaron Driver, previously on social media support for terrorist organization Islamic State had spoken. In the video, a masked driver announced an assault on, he referred to recent attacks in Europe and acclaimed him,, the brave men and women of the jihad '.,, Oh Canada, you are so often warned, it is so often told that those who fight against the Islamic State expects, '' says Driver in the video.

When the authorities had identified driver once pulled the police out en masse to his home in the city of Strathroy, in the province of Ontario. There Driver brought an explosive device detonated in the backseat of a taxi. The police could not establish with certainty whether Driver came to an end by the explosion or whether police bullets him were fatal. To our knowledge Driver had no accomplices.


After Driver had commented favorably on social media about IS he was ultimately not prosecuted. The judge forbade him to use it even more social media or computers, or make contact with the WAS group.