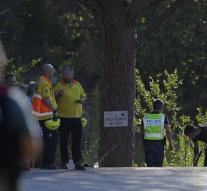 amsterdam - The most sought after terrorist in the world shot down on Monday night: Younes Abouyaaqoub. He was the main suspect of 'Barcelona'. What do we know now?

On Monday, the police killed Abouyaaqoub. Earlier in the day he was confirmed to be the suspected driver of the deadly van. The 22-year-old Moroccan was then given 'Europe as a whole', as requested by the police.

Eventually, according to Spanish media, he was seen by a woman. Who warned the police. Abouyaaqoub came in more and more, fled a vineyard and was eventually shot dead. He had a seat belt, said the police, after which agents decided to shoot.

Soon after, Abouyaaqoub did not dare to approach: the bombs could still go down again. As a result, it was unclear whether it was about him. Eventually, the strap was fake, and indeed the body appeared to be Abouyaaqoub.

Earlier, three suspects were arrested: two Moroccans and one Spaniard from the North African enclave Melilla. They will appear in Madrid soon. That's what five other terrorists can not do: they were shot by the police in Cambrils after a second attack. The latter eventually remained relatively limited by the police action. One woman died from her injuries.

Two other terrorist suspects already died on Wednesday before the attacks took place. That happened when an Alcanar explosion occurred. In a 'bombhouse' full of gas cylinders, they had a headquarters, police suspect. Those gas bottles would be used in a run, but after the explosion was switched to Plan B.

Among the two dead in Alcanar is probably the imam Abdelbaki Es Satty, who could be the 'brain' behind the attacks.

The police say that now all twelve chief suspects are caught. However, it will continue to work on the investigation, which may allow more suspects to be arrested in the coming days.