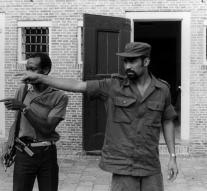 amsterdam - Relatives of victims of the December murders steps to the IMF and other international organizations to denounce the conduct of the Surinamese President Bouterse. The relatives will ask the organizations whether they want to work with Bouterse, now the president has blocked the resumption of December Murder process.

That said Romeo Hoost Committee Commemorating Victims Suriname Wednesday against the ANP.,, At the moment there is a representative of the International Monetary Fund in Suriname since the government Bouterse much funding needs, 'said Hoost.,, I hope that the people of the IMF now have an eye on what kind of person they are dealing with. We like it or explain. '