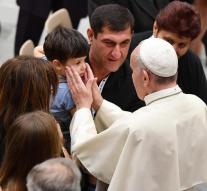 - Pope Francis on Saturday in Vatican relatives of the victims of the terrorist attack on July 14 in Nice received in audience. About three hundred relatives visited the prelate.

The Pope (79) called during the meeting to jointly go to war against hatred and violence. The tendency to answer hatred with hatred and violence with violence, is great. If we experience, it's time to talk with our heart, he said. ' I would like to share your pain, a pain that is even more intense when you think of the children, even entire families were suddenly dramatically snatched from life. \'

The 31-year-old Tunisian Mohamed Lahouaiej Bouhlel rode on the French national holiday on the Promenade des Anglais 86 people with a truck death. Dozens of others were injured. Islamic State claimed responsibility.