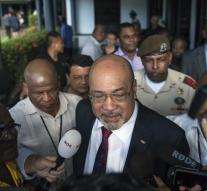 - The lawyer of the families of the victims of the December murders, Hugo Essed, believes that the court martial has made a good decision by the trial about to adjourn these killings to August 5th.,, The court martial did what they had to do. There is therefore no question of prohibiting '' Essed concludes.

Prosecutor Roy Elgin asked to stop the process, the court-martial in Suriname. It is a former army chief and current president of Suriname, Desi Bouterse, prime suspect.

The process is about the murder of fourteen Surinamese and Dutch on 8 and December 9, 1982 in Suriname. The victims were opponents of the then military regime of Bouterse. They were also tortured before their death.


Thursday Elgin actually had his sentencing should speak out against, inter alia, the Surinamese president. Bouterse has managed to avoid this by taking the decision to give the Attorney General to stop his prosecution in this process.

Processed finds that the decision of Bouterse is again talk of interference in an ongoing case, as in 2012 was the case when the parliament adopted the amnesty law.,, This is a classic example of interference. So martial can use the same arguments to allow the process to go, '' said the lawyer.

Essed find the reactions from the community on the action of Bouterse,, encouraging.,, People are starting to get that he's his own skin to save and has not taken this decision in the interest of the state. Even supporters of Bouterse I hear that. ''


Irwin Kanhai, Bouterse's lawyer, called the argument interference,, bullshit '. He thinks that the parliament, the parliament has the right to grant amnesty. As for him, the process must be stopped.