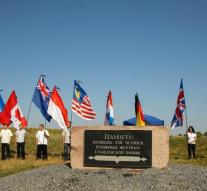 vijfhuizen - Relatives of the victims of the disaster with flight MH17 Sunday commemorate their loved ones in Vijfhuizen. All 298 names will be read out of the victims and a minute's silence will be held.

The survivors fill the memorial itself program with speeches, singing and dancing. The minute's silence will be held around the time when the radio contact with the Boeing 777 Malaysia Airlines lost over eastern Ukraine on July 17, 2014.

Prime Minister Mark Rutte attends the commemoration ceremony at the invitation of the relatives. He will not speak. With his presence Rutte wants to support the bereaved.


Last year the commemoration in Nieuwegein. This time the meeting in Vijfhuizen is Schiphol, near the spot where the bereaved in 2017 to unveil the memorial to the victims.

Exactly two years after the disaster, there is still much uncertainty for the families. The Dutch Safety Board concluded last year that the drone was shot down by a Buk missile. But the criminal investigation into who is responsible, is still ongoing.

Only after the summer, the first results are presented. This involves among other things the exact spot where the weapon is fired. The road to a trial of those responsible is still long.