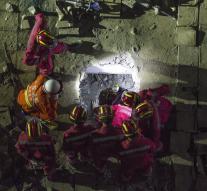 shenzen - Rescuers on Wednesday in the southern Chinese city of Shenzen more than sixty hours after a landslide rescued a man who was buried under mud and debris. According to news agency Xinhua said the man that in his neighborhood still is a survivor, but which has not been found. The rescued man was injured in his legs.

In Shenzen Sunday were destroyed by the landslide dozens of buildings. More than seventy people are still missing. On Tuesday, the first body was recovered. Wednesday was also found a second victim.

The landslide was caused by a mudslide from an overflowing landfill, which should have been closed in February, according to authorities.