Home / Tech / Survive together after a post-apocalyptic era 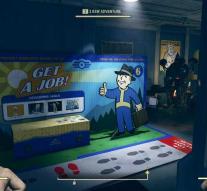 - Multiplayer, playing together with other people from our reality, seems to become a growing agenda item. The most popular games, both played and viewed, are games in which players compete with one against the other.

This trend is so obvious that a large franchise like Call of Duty exchanges the narrative solo experience for an online battle royale mode to match Fortnite. However, this is not the only example that focuses on a more team-oriented approach, because developer Bethesda Game Studios can also benefit from it. In November, Fallout 76 is planned: surviving together in a post-apocalyptic era!

Fallout 76, the upcoming part within the series, further elaborates on the well-known concept. For example, the series of role-play elements mixes with shooting elements and the setting of the franchise plays out in an alternative timeline. In addition, the earth as we know it is largely destroyed by a nuclear war. Nevertheless, survivors of this disaster are trying to build up a new community here and there, with hope for a better future. This means that a lot of collaboration has to be done to make a chance between the dangers that the environment sends to you.