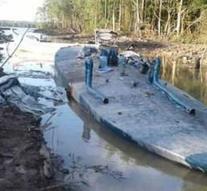 paramaribo - A team from the Surinamese police encountered a special investigation on a large submarine that was probably used for drug transport. The submarine was found in a creek in the Saramacca district, west of the capital Paramaribo. The National Information Institute (NII) announced this on Friday.

Three Colombians were present at the vessel. They have been arrested by judicial authorities. According to the NII, the submarine was probably used for overseas drug transports. Because the police suspect that Surinamese are involved, the investigation will be continued.

The Ministry of Justice and Police wants to do everything to prevent Suriname from being listed as a popular transit port for narcotics. The Surinamese government will intensify its cooperation with international anti-drug organizations and will also become more active with the mapping of gangs dealing with drug-related crime, according to the NII.