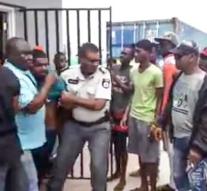 paramaribo - Fishermen in Suriname can sail out of the sea without fear again. This promised Minister of Defense Ronni Benschop Friday to the fishermen. Benschop did not want to tell us what measures were taken to reduce safety at sea.

Two weeks ago four fishing boats with twenty crew members were brutally robbed by pirates for the Surinamese coast. Five men are known to have survived the attack. Four victims have been salvaged and eleven fishermen are still missing.

The investigation into the suspected Guyanese perpetrators is still in full swing. In the past few days, 18 suspects were brought before the Examining Judge. The Public Prosecutor wants the men to remain locked up until the investigation is completed. According to the police, the investigation is slow, because the fishermen give little information for fear of countermeasures.

Boat owners reacted cautiously to Benschop's announcement. Many work with Guyanese fishermen who are illegal in Suriname and they fear extra checks. Minister of Justice and Police Stuart Getrouw has said that they want to find a solution together with the owners.

According to the chairman of the Visserscollectief, about fifty boats will sail on Saturday.