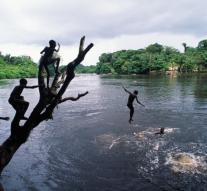 - What the experts have thought, Suriname can earn lots of money with the export of fresh surface water. Among others, the tourist island of Barbados is interested in Surinamese waters. This emerges from a study that nature organization Conservation International Suriname (CIS) presented Tuesday morning in Paramaribo.

The Dutch embassy in Suriname has made ​​over 120,000 euros available for further research into the effects of water exports for nature. The Dutch research institute Deltares is conducting this research together with a Surinamese environmental institute out.

The feasibility study was partly funded by the company Amazon Resources. This Swiss- Dutch company has been authorized in 2012 by the Surinamese government to be allowed to ' drain ' and sell Surinamese freshwater.

The intention is that the exporting company the water 'tapped' from a river, about 30 kilometers from the mouth, where the water flows into the Atlantic Ocean. It won river water will then be pumped into large bags, which are drawn to its destination by boat.