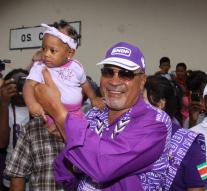 - Suriname is Wednesday forty years of independence from the Netherlands. This happy event is only sober celebrated by the approximately 475 000 inhabitants, the economic crisis had significant expenditure on festivities not matter, as President Desi Bouterse in the run-up to November 25 decided.

The capital Paramaribo is therefore not bring the scene of heads of state that come their congratulations. Netherlands even sent no minister or other dignitary to its former colony. The Dutch ambassador Ernst Northman is Thursday attended a special meeting of the parliament and a parade of the Surinamese army.

At the time of independence Suriname had more than twenty years a semi- autonomous status within the Kingdom of the Netherlands. Under the Declaration of Independence appeared in 1975 the signature of Queen Juliana, Prime Minister Den Uyl and on behalf of the new republic 's first president Johan Ferrier.