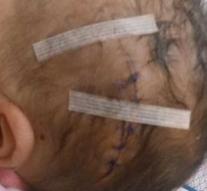 reims - The heavily pregnant Hélène suffered a trauma due to her delivery. During the planned caesarean section, the surgeon of the hospital cut the head of her baby.

The Francaise had an appointment on 24 August at a hospital in Courlancy, a district of Reims. She would give birth to her third child. That would come to the world via a cesarean section.

Hélène was spanked, so she could give birth without pain. But it went wrong during the Caesarean section.

The doctor not only made a cut in her womb, but also in the baby's head. As a result, her daughter had to get six stitches after birth. According to the woman, no apologies from the gynecologist came later. 'It's okay,' it sounded from the medical staff. 'The injuries are only on the top of her head. '

The woman also complains that the anesthesia was not sufficient. 'I felt everything. I was in pain, I cried and I screamed. It really took too long, 'the woman writes.

The hospital has officially apologized, but at the same time it says that it is part of the risks of cesarean sections.

That confirms also doctor and obstetrician Ellen Roets (UZ Gent), writes Het Nieuwblad. 'Every gynecologist knows that you have to pay attention to something like this, because it happens faster than you think. Especially when it concerns a non-premature Caesarean section and the head of the child is already very low. '

'At that moment the uterus is very thin and there are only a few millimeters between the uterine wall and the head. Before you know it, you are sitting with the knife in the womb. It sometimes happens that we cut into the body of the child. Especially in emergency operations, the risk is higher: you do not want to endanger the child, so finish the delivery quickly. Almost all my colleagues have experienced it in their career, 'Roets knows.

The good news: the baby has virtually nothing left. 'It is a surgical cut made with a scalpel. That kind of cut, usually no more than an inch or two, usually heals very quickly and well, 'says the doctor.

Subscribe to our newsletter and receive the best stories in your mailbox every day!