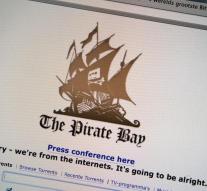 - The case about whether or not blocking torrent site The Pirate Bay is still not finished. The Supreme Court has decided to put questions to the European Court of Justice in Luxembourg. Any further decision is provisionally arrested.

The dispute between the Foundation BREIN, which represents the interests of artists and producers, and providers Ziggo and XS4ALL has been running for years. The court ruled earlier at the request of BREIN which had to block The Pirate Bay because the providers can be downloaded illegally on the site. The court turned blockade appeal back, because the measure would not be effective.

The Supreme Court now wants to know whether the European court finds that The Pirate Bay itself illegal content ' imparted to the public ". If not, then the next question is whether the court may impose a blockade on Internet providers.