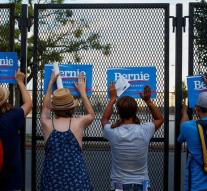 - Supporters of Bernie Sanders are angry runaway during the convention of Democrats in Philadelphia after Hillary Clinton was officially selected as a candidate for the upcoming presidential election.

Several supporters stormed the media tent there to sit on the ground in protest. They are angry about the fact that the party was trying to favor Clinton during the primaries at the expense of Sanders. That fact emerged from leaked emails that are put on WikiLeaks.

A day earlier were already arrested dozens of supporters of Sanders, who tried to climb over fences.