Home / World / Supporters Ajax and Olympique Lyon fought on each other 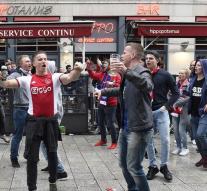 lyon - The French police ended in Lyon a fight between about fifty members of the Ajax hard core and about the same number of hooligans from the Olympique Lyon club. The newspaper Le Progrès announced Thursday that the two groups of wednesday evenings went to the fist in the district of Gerland, where the same name is the stadium of Olympique.

Due to a large and timely deployment of the police, the two groups were quickly driven apart. A Dutchman and ten French were arrested. They are still stuck, reported French media.

Ajax plays on the southern edge of Lyon city center on Thursday night in the Stade de Gerland against the club from that city.