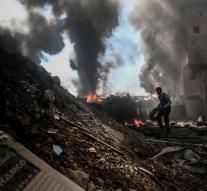 - The major powers do not run very hot for Turkey's plan to set up a buffer zone in northern Syria, but point also unfinished. The Turkey-backed rebels in the area insist it in the 'security zone', but that should, according to them, or get the blessing of that great powers.

Turkish troops withdrew late last month across the Syrian border to chase away from the border along with their allies among the Syrian rebels Islamic State and to repel the Kurdish militia YPG behind the Euphrates River. Turkey strives for some time for a buffer zone in northern Syria to halt the flow of refugees to Turkey. Such a zone now seems within reach.

Rebel leader Ahmed Osman Sultan Murad brigade warned that the YPG is still not withdrawn to the eastern or left bank of the Euphrates. The Kurds claim it is. According to Osman is a confrontation between his men and YPG fighters imminent.