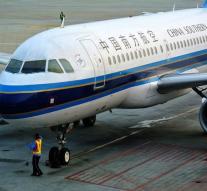 shanghai - The 80-year-old Mrs Qiu has been in Shanghai for a huge delay by throwing coins to the engine just before they boarded a plane.

The convinced Buddhist did this to ensure a safe journey. The woman who traveled with her husband, her daughter and her son-in-law, threw nine coins in the direction of the airplane while driving the stairs. Eight coins missed their goal, but one disappeared in the machine, reports the Daily Mail.

Other passengers saw the incident, the woman attended the airport police and were then taken off board again. About 150 people had to wait four hours for the engine to be checked. Mrs Qiu has to explain to the police office why she came to terms with her.

China Southern Airlines's device was ready for a domestic flight from Shanghai Pudong International Airport to Guangzhou. That flight was still carried out, with a considerable delay.