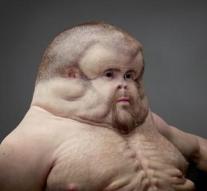 melbourne - The human body is not developing fast enough to survive a car accident. To illustrate how our bodies would look like if this were the case, has built an Australian traffic organization 'Graham': the only 'man' in the world who will not kill a devastating car crash.

Graham, designed by sculptor Patricia Piccinini, is part of a campaign to reduce the number of road accident victims in Australia. Its striking appearance is on eight points but the body as we know it. For example, Graham's head is a type of helmet and his between its ribs, which are larger than normally secured, mini-airbags.

Furthermore, Graham has extra nipples and no neck. His lack of a neck prevents whiplash, its flat face protecting his nose and ears. Graham also has a thicker skin which provides extra protection. He owns a pair of strong legs and his knees can bend in all directions to prevent him from breaking his legs.


The dummy is made of fiber glass, silicone, resin, and human hair. He exhibited at the State Library in Melbourne.