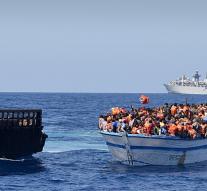 rome - Six months after the capsizing of a refugee boat on the Mediterranean, where presumably found some 750 crew death, the wreck can still be salvaged. The accident to the coast of Libya in April is considered the deadliest accident with refugees at sea so far.

" The operation will last for 120 days, if the weather permits ", said Vincenzo Piscitelli of the Italian Ministry of Interior. A private company starting this " second stage ".

The Italian Coast Guard has been recovered 142 bodies. At least 28 people on board were saved. It is expected that certainly hundreds of bodies found in the wreck. If possible, they will be identified and buried.