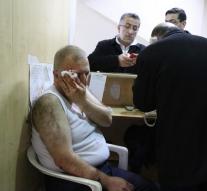 kamishli - In suicide bombings at two restaurants in the northeast of Syria, dozens killed or wounded. The explosions took place at the Turkish border in the town Kamishli, which is under Kurdish control.

According to the Syrian Observatory for Human Rights, at least thirty people slain or wounded. A Kurdish official said the attacks were probably carried out by Islamic State.