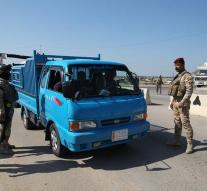 baghdad - In a suicide attack on a mosque west of Baghdad, at least twelve people were killed in the night of Monday to Tuesday (local time), notify the police and medical workers.

The perpetrator blew himself up with a vest full of explosives at Abu Ghraib, 25 kilometers from the Iraqi capital. More than thirty people were injured.

It is the first attack near Baghdad victory since the Iraqi government demanded in the struggle with extremists of the group Islamic State in Fallujah. From that town were planned many terrorist attacks and implemented.


Abu Ghraib is in an area with a predominantly Sunni population.