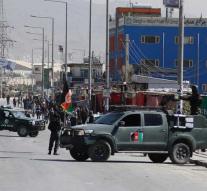 kabul - A suicide bomber has blown himself up at a polling station in the north of the Afghan capital Kabul on Saturday. At least fifteen people were killed. More than 25 people were also injured, a safety officer said.

Among the dead are ten civilians and five policemen. The attack came when voting was still taking place before the parliamentary elections. The authorities were already concerned that these would be a target for militant attacks. The suicide attack seems the heaviest in a series of violent incidents during election day. In addition, eleven people had already died in the past.

The attack was not immediately claimed. But the militant Taliban have issued a series of statements in which people are told not to participate in what they regard as a process imposed by foreign parties. They also warned that polling stations can be attacked.

In several places in Afghanistan the polling stations remain open one day longer because the elections are chaotic. The electoral commission announced that in places where there are problems, it is still possible to vote on Sunday. The violence and organizational problems overshadow the first parliamentary elections in eight years.