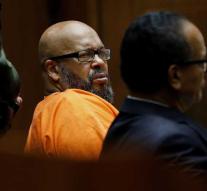 los angeles - The American rap producer Marion 'Suge' Knight has signed a deal with the public prosecutor in Los Angeles. The 53-year-old rap producer has agreed to a prison sentence of 28 years for the intentional arrival of two men. One of the victims did not survive.

The incident took place in January of 2015. Just before that, Knight had an argument on the set of a commercial for the film Straight Outta Compton. He then followed filmmaker Cle Sloan to a civilian tent, and drove him and hip-hop entrepreneur Terry Carter. Sloan shattered his foot, Carter died on the spot.