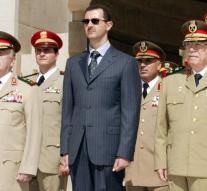 vienna - The United Nations commission charged with the war in Syria has 'enough evidence to condemn Syrian President Bashar al-Assad for war crimes.'

That says the deputy head of the UN commission for Syria Carla Del Ponte (70) Sunday in a conversation with the Swiss newspaper SonntagsZeitung. It is not known when Del Ponte retires.

Del Ponte announced her resignation last week as head of the commission. She is frustrated by the refusal of the UN Security Council to set up a special tribunal for Syria.

'I am convinced there is enough evidence against Assad. That's why it's so frustrating that the UN does not take any steps. The preparatory work has been done. Now steps must be taken to install a court and prosecutor, 'said Del Ponte in the interview.