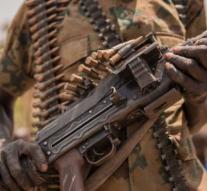 geneva - The South Sudanese army has killed 232 civilians and raped 120 women and girls in May and April. This is stated in a research report from the United Nations (UN). According to the UN, three commanders bear the greatest responsibility for the atrocities committed between 16 April and 24 May. Possibly war crimes.

In the country there has been a complicated and bloody civil war for years. According to the UN report, elderly people were set on fire, women were hanged and fleeing civilians were shot. 'The perpetrators can not get away with it,' said High Commissioner for Human Rights Zeid Ra'ad al-Hussein.

Violence between different tribes in South Sudan occurs regularly. The government and the rebel groups have agreed several times to stop the fighting. The last cease-fire agreement is from December 2017. The agreement is regularly violated in different parts of the country.