Home / Tech / Successor for the best headphones in the world 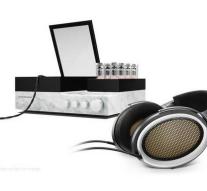 - Orpheus HE90 Sennheiser was named in the 90's as the best headphones in the world. That also allowed with a price tag of $ 16,000. The German manufacturer, today unveiled the successor to the former flagship both in sound exceeds the price.

The new Orpheus CE consists like its predecessor from a headphone amplifier and headphones. The amplifier combines the advantages of a tube amplifier with that of a transistor amplifier. The housing of the amplifier is made ​​of marble. And not just marble, but the same type of marble from Carrara, where Michelangelo his sculptures made ​​of.

The cables of the headphones according to the manufacturer of such superior quality that they do not weaken the sound. In total, the system is composed with man made from more than 6000 components. All of this timber would result in a reproduction precision, exceptional spaciousness and a frequency range that extends far beyond the range of human hearing.

This superior quality has to be handled in the bag. The sale price of the device that is expected mid next year, is between $ 50. 000 and $ 60. 000 to lie. From the first time Orpheus are only 300 copies made ​​. The new Orpheus CE will not appear in a limited edition already be made annually no more than 250 copies.