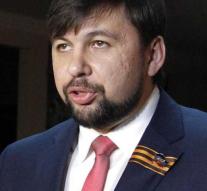 donetsk - For the time being, Denis Poesjilin is in charge of the Ukrainian separatist republic of Donetsk. The politician follows the pro-Russian separatist leader Aleksandr Zachartsjenko, who recently died in a bomb attack. Pushinil was the chairman of the parliament of the 'People's Republic'.

The 37-year-old Poesjilin says in local media to continue the policy of his predecessor. He still applies as acting leader for the time being. On November 11, a new parliament and leader is elected in the area, which in 2014 declared itself independent of the pro-Western central government in Kiev.

It is still unclear who is behind the murder of Zachartsjenko. He was not the first separatist leader who died in an attack. In recent years, rebel commanders Arseni Pavlov, aka Motorola, and Mikhail Tolstych ('Givi') have been liquidated.

It has been unsettling for years in the east of Ukraine. In addition to Donetsk, neighboring Luhansk has declared itself independent. That happened after Russia annexed the Ukrainian peninsula of Crimea. Fighting between government troops and the separatists involved many thousands of deaths.