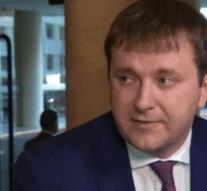 moscow - Maxim Oresjkin is the new Minister of Economic Affairs of Russia. He succeeds Alexei Oelioekajev that earlier this month was arrested for bribery. The appointment is a promotion for Oresjkin who was Minister for Finance.

Oelioekajev was arrested because he would have received 2 million dollars for a positive review, which made it possible for oil producer Rosneft half became owner of Bashneft, the sixth oil company in Russia. Putin suggested Oelioekajev in June 2013 as Minister of Economic Affairs.

The 34-year-old Oresjkin comes from the banking world and was nominated Tuesday by President Putin. He worked at the Central Bank of Russia. In 2015 he became Minister of Finance.