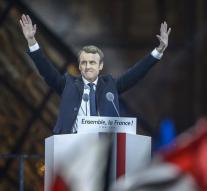 paris - The French voters return to polls on Sunday for the second time in a short time. The man who is always out of the box is meanwhile president of the republic. The party of Emmanuel Macron, La République and Marche (LREM), stalled at great profit in the second round of parliamentary elections.

That may be a historical gain, because the party is actually brand new. She was founded on April 6 last year. Last Sunday, LREM picked up about 32 percent of the votes. In the second round Sunday, according to forecasts in parliament, the Assembly National, the party would reach 415 to 445 out of 577 seats. That is a real humiliation of the established political order in France.

Sunday low was the low turnout. Not yet half (more than 48 percent) of the electorate showed up, an absolute low. The political opponents did it badly. The Republicans continued to rise at 21.5 percent, about halfway. The Socialists received a huge blow with the support of only 7.5 percent of the electorate. They could lose more than 200 seats. The Front National of Marine Le Pen came to 13.2 percent.

The opposition defense is: Macron became president (with more than 61 percent of the vote) because the French rejected the extreme right in the person of Navy Le Pen. Now, the LREM threatens to get such a large majority in the people's representation that all political discussion disappears. A stifling thing for democracy, such a monopoly, said Jean-Christophe Cambadelis, the leader of the Socialists.

What the LREM propels to a significant extent is the personal popularity of Emmanuel Macron. In the polls, the new 39-year-old president is doing fine. During his meetings with the great of the earth, including the Russian President Putin, who he received at the end of Versailles and US leader Donald Trump, he left a good impression, the French believe.