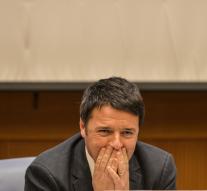 rome - The role of the Italian Senate , the Senate , may be drastically reduced . The Senate voted overwhelmingly Tuesday to a bill that the House must make it smaller and give less to say. This forms part of the plans of Prime Minister Matteo Renzi in order to make the state more effectively.

Tuesday 's vote was a boost for Renzi , encountered much resistance to his reforms. To implement the plan to the Italian Senate subordinate to parliament , the Chamber of Deputies , more is needed. Thus amended the constitution and should therefore be more ballots in both chambers of parliament and also required a referendum .

Italy has a closed political compromise in 1947 actually no Senate and House , each with its own role. Italy struggles with two rival " War Rooms " with virtually the same powers . This can paralyze politics and the decisiveness of the government . In 2013, for example, arose in the two chambers different political majorities.