Home / World / Substantial criticism of Venezuela during the top of Peru 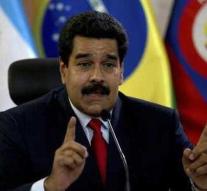 lima - US Vice President Mike Pence has called on regional leaders to do more to isolate Venezuelan president Nicolás Maduro. He said at the top of American countries in Peru that Washington is not 'on the sidelines' while the country collapses.

Other countries on the two-day 'Summit of the Americas' also criticized Venezuela, which is in a deep and hopeless crisis due to mismanagement. Colombian President Juan Manuel Santos said the Maduro government is 'in denial', while the rest of the world 'looks shocked while the Venezuelan people are physically starving'.

The Venezuelan leader himself was not welcome in Peru. That did not stop him from labeling the top to 'a complete failure. 'During a speech in Caracas, Maduro said he had seen reports on' contentless speeches by right-wing, unpopular, murderous presidents who are servants of the imperialists '.