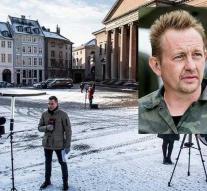 copenhagen - Danish submarine and rocket builder Peter Madsen (47) sentenced to life imprisonment has been mistreated in prison. An eighteen-year-old fellow prisoner struck the murderer of the Swedish journalist Kim Wall in such a way that he had to be treated in the hospital, his lawyer reported to Danish media.

Madsen took the journalist in August last year in his approximately 17 meter long submarine. The authorities later found her body parts back in the water. The body was sawn into pieces. The court sentenced Madsen to life in April, but he appealed. That appeal must be in September. His lawyer has asked for a transfer from Madsen to another prison.