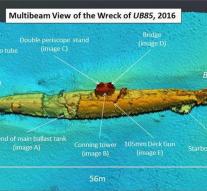 london - A British company thinks a German submarine from World War I to have discovered in the Irish Sea. That happened by chance when laying a power cable from Scotland to England and Wales. According to experts, the contours of the wreck on sonar images to see clearly.

It could go to the UL-85 which had come to light late April 1918 because a leak had originated in a hatch. The 34 men aboard were taken prisoner by the British navy. After the war, the German captain came up with a remarkable story.

The night before his submarine was attacked by a huge sea monster. The crew had vainly shot at the mysterious beast that much damage had been done that diving was not possible.