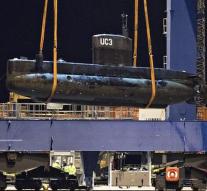 stockholm - The Swedish and Danish police are investigating whether the DNA of Peter Madsen, the submarine captain suspected of the murder of Swedish journalist Kim Wall, has also arisen in unresolved murder cases.

The Swedish police still have several cases in which chopped women's bodies were found and wanted to know if Madsen had something to do with that. There is no direct suspicion, but it is a standard procedure in Sweden to do such an investigation. Moreover, according to the Danish newspaper, Madsen stayed CPH Post regularly in the area where the bodies were found.