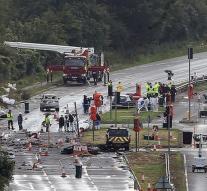 - British stunt pilot who crashed his jet last August during an air show in southern England Shoreham prosecuted for manslaughter. That confirmed the police Friday against the BBC. In the accident, eleven people died.

The former pilot of the Royal Air Force was questioned by police in December after he had recovered from serious injuries. After the crash, where his plane landed in four pieces in the audience, the 52-year-old pilot was kept in an artificial coma.