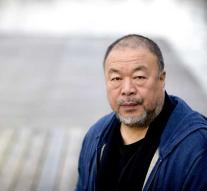 beijing - Without warning him, the Chinese authorities started to demolish a studio in Beijing by the activist and artist Ai Weiwei. The sixty-year-old dissident put on Instagram a video showing how his studio with a heavy machine is destroyed.

The artist had opened the industrial-style building six years ago. Seven years ago, the Chinese government had already demolished a studio of Ai Weiwei in Shanghai, because it would be illegal.

Because of his political activism and open criticism of those in power, Ai Weiwei ran into problems several times in his native country of China. In 2011 he was arrested and he had to hand in his passport. He received it back in 2015. He has lived in Berlin since then.