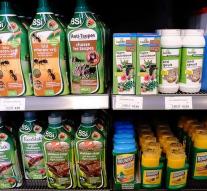 luxembourg - Reports of the chemical industry use regulators to determine whether a particular pesticide may enter the market, should be made public. The argument that this will lie confidential commercial information on the street must be rejected.

That the European Court of Justice ruled Wednesday. Authorities should provide access to information about the environmental risks of the release of a pesticide, said the judges, that statement did two things.

Greenpeace Netherlands had requested disclosure of reports on the herbicide glyphosate. The European Commission decided in late June to extend the authorization for this. Bees Foundation wanted to see documents on imidacloprid, a plant protection product that would be disastrous for bees. The Dutch regulator Ctgb would have refused.