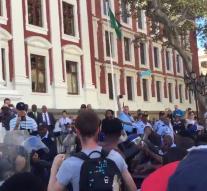 - Hundreds if not thousands of students protest at this moment in South Africa's Cape Town against the increases in tuition fees. Earlier today, the furious students were expelled from the parliament when they expressed their discontent in the public gallery. Political parties also " Economic Freedom Fighters" is present at the demonstration.

Students in the country crossed en masse after the parliament was planning to raise tuition fees, as part of a reform package. The police meanwhile fired warning shots, and the students keep themselves at the parliament where they " We want to Blade " call, referring to Bonginkosi Blade, the Minister of Education.

According to multiple sources on Twitter students were injured by grenades of riot police.

We have just stormed parliament and been hit with stun grenades by the police #NationalShutDown #RMF pic.twitter.com/wYRcPv7ztW