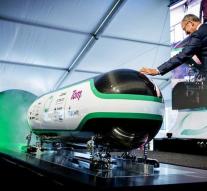 delft - Minister Henk Kamp (Economic Affairs) on Thursday unveiled the revolutionary transport capsule of the Delft student team 'Delft Hyperloop. Thus they will end this summer battle with thirty other teams in the finals of the American League of Elon Musk, the entrepreneur behind Tesla and SpaceX. Hauling quickly people and goods in a capsule through a vacuum tube this will be another step closer.

,, Netherlands has the ambition to remain among the smartest country in the world with a strong knowledge economy. The TU Delft contrived Hyperloop is an example of an innovative solution at the global level that could enhance future economic growth and competitiveness of the Netherlands by contributing to faster, more durable and more efficient transportation, '' says Kamp.

The concept of a conveyor system in air pressure tubes was coined by Musk. Due to the low air pressure against vacuum on, the capsules have barely friction making them speeds can reach over 1000 kilometers per hour. To boost its development billionaire Musk began a year ago, 'Hyperloop Pod Competition.


In the final of the competition, on a test track in California, the capsules performance and speeds are measured. According to Minister Kamp make,, smart and enterprising students' TU Delft a good chance to beat their competitors.