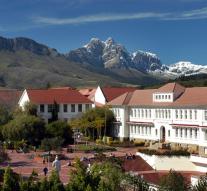 stellenbosch - Students at the University of Stellenbosch have their way : they no longer receive college in Afrikaans but in English. That the leadership of the South African university decided Friday.

Stellenbosch applied during the apartheid regime as the intellectual center of the Afrikaners, the white South Africans who argued behind the black population. Students complained that the continuing use of Afrikaans was racist and was a handicap for black students, who are mostly in English.

" Because English is the official language of South Africa, all education will be at the University of Stellenbosch are taught in English ", said the board according to The Guardian. The university does hold an African study.

" This radical change, the use of Afrikaans as an important means of oppression and exclusion towards the adoption of a language shared by all as the official language, is an important victory in the fight to make education accessible ", stated students.

Recently, students succeed in Cape Town is to make a statue of the British colonist Cecil Rhodes remove.