Home / World / Student is suing Washington Post for a video 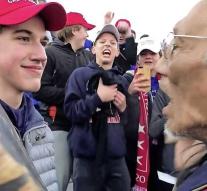 washington - The student who would have ridiculed a Vietnam veteran has filed a $ 250 million claim against the Washington Post.

This sixteen-year-old Nicholas Sandmann became known because of a short film in which he looks at the 64-year-old veteran of Indian origin Nathan Philips. The video and a photo went viral and caused a lot of noise in the United States.