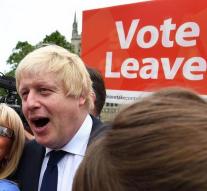 london - More than a million Britons support the petition for a repeat of the referendum on the 'Brexit', the departure of Britain from the European Union. The action took Friday afternoon much more than the required 100,000 signatures to 'put down' the proposal in the parliament agenda. The British Parliament is therefore likely to soon hold a debate on the proposal.

Britain chose Friday with a majority of 52% for a Brexit, but find promoters that weighty matters such as EU membership, must meet a referendum minimum requirements.

They argue that to a rise of less than three quarters of voters requires a majority of 60 percent to the outcome of the referendum policy. With only 52 percent of voters leaving the union, brexit, the government should not break ties with Brussels. The website of the parliament, where the petition can be signed, lay flat Friday some time by the huge interest.